From Confederate Statues to the Classroom 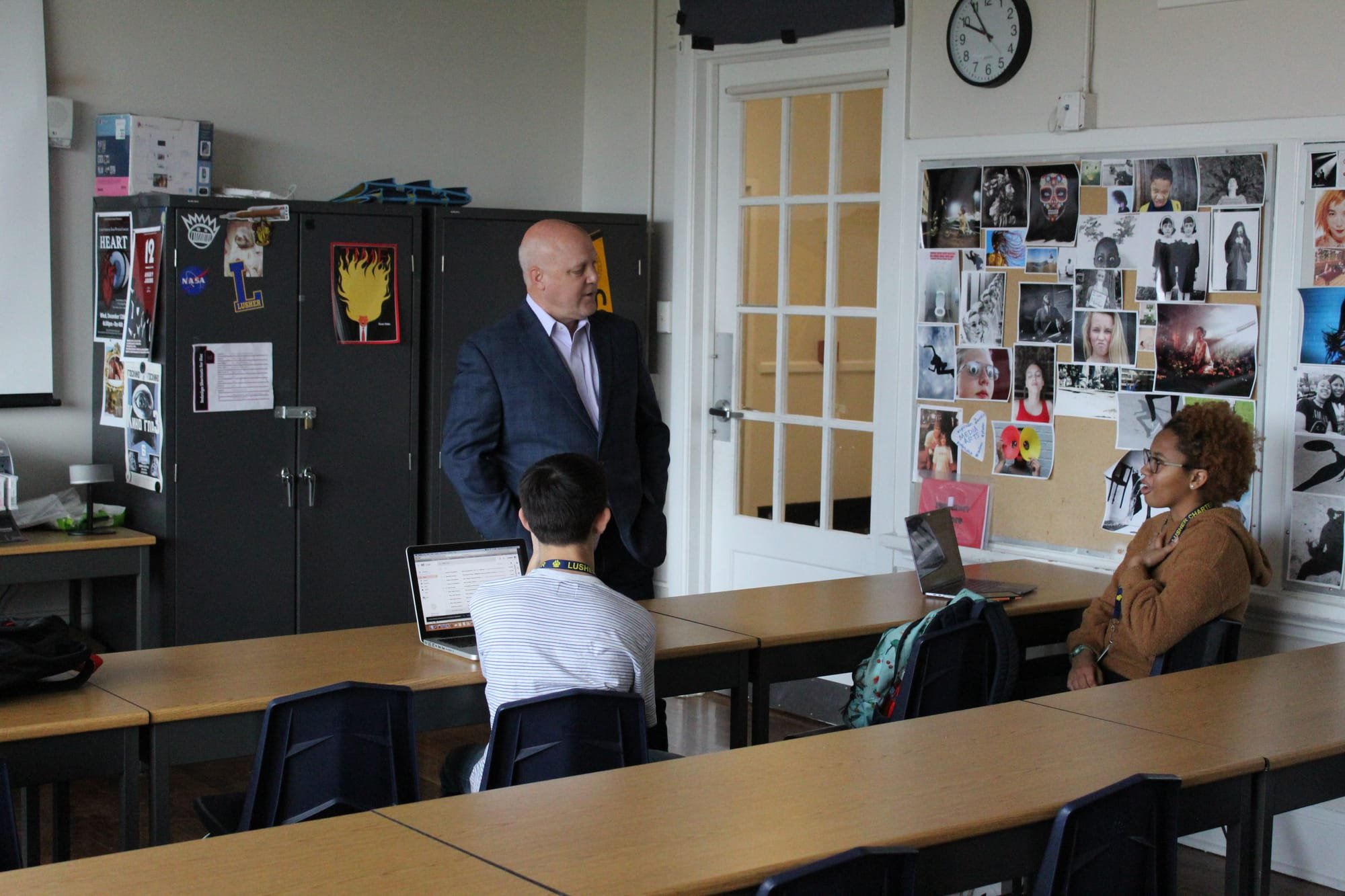 Could you imagine walking into class with former Mayor Mitch Landrieu ready to teach you? For selected AP Government seniors at Lusher Charter School, this was their reality before distance learning. Mayor Mitch Landrieu took the opportunity to teach 14 seniors at Lusher Charter School every Monday of the 2019-2020 school year about the importance of Constitutional rights and the significance of their voice.

Lusher Publications class had the chance to chat with Mr. Landrieu about the future of Lusher students and the resiliency of New Orleans.

“So what are the rules?” Mitch Landrieu began. “When you’re talking to someone, there are always rules.” He gazed at the small batch of high school journalists in the room with amusement. “Everyone’s welcome to ask a question.”

After teaching as a fellow for two semesters at the Harvard Kennedy School of Institute and Politics, the former mayor gained a passion for teaching his skill set to kids in New Orleans.  He spent most of his time at Harvard working on the complications of low diversity, and something about Lusher piqued his interest.

“Lusher is a school known for academic excellence and diversity,” Landrieu told Ms. Crockett’s journalists in training. “This school fits into the framework of my foundation, E Pluribus Unum, which was an effort to help unite the South across race and class. Lusher, in my perspective, is a great representative school founded in the notion of representative diversity. Plus, it just seemed like a whole lot of fun, and it was really close to my house.”

Something that has set this AP Government class apart from the rest, however, is the field trips. In November, the 14-student group and Mitch Landrieu took a trip to the Angola State Penitentiary--not to attend the notorious Angola Rodeo but to understand the complexities of the criminal justice system.

“There’s nothing better than seeing what you learn in the classroom,” Landrieu said. “When you talk about the 8th Amendment—cruel and unusual punishment—that’s one thing, but when you see the individuals on death row waiting who are likely to be executed and see the table they’re likely to be executed on, you witness the immediacy you can’t receive in the classroom.”

Former Mayor Landrieu was eager to return to teach a group of seniors in New Orleans because when he was a senior in high school, he cherished how his civics teacher pushed him to understand the theory of government. He wanted to return the favor and pass his knowledge on to a future generation of bright and skillful individuals who also share his passion for politics.

However, one thing that concerns Mitch Landrieu is students’ receptiveness. “Everybody seems pretty engaged, but I worry about whether or not I’m hitting the elements in the syllabus while simultaneously revealing the truth about how life works.”

Every Monday when Mitch Landrieu is in that first-block class, he expects his students to come prepared with input about current affairs in the media because if one is interested in government, they need to know what’s happening in the world every day.

Landrieu believes it’s important to spend time learning what’s in the news because the curriculum unfolds alongside current events. But as for the state of journalism, Landrieu said, “it’s under a lot of pressure right now.”

The culprits: the rapid shift in technology and the 24/7 news cycle. “Journalists have to continually fill that space,” he says, “ which leads to the danger of ingenuity.” For Landrieu, he always had pieces of paper in front of him that produced a sense of “corporate structure,” but he tries to read various news outlets to understand all perspectives—even though everyone has biases.

“I’m a moderate thinker,” Landrieu said. “That puts you in a different place in Louisiana than it would in Massachusetts because the spectrums of where you fit are quite different.” But Landrieu doesn’t see himself departing from New Orleans. He was born and raised in New Orleans, and he has family speckled throughout the city. It would be difficult for him to uproot his legacy and anchor himself somewhere else because New Orleans is home.

Landrieu spread his hand across the classroom and raised his voice, “There may be other places in the world, but none of them are like New Orleans.” He smiled with a gleam in his eyes and said,“There’s something about New Orleans that brings you back.”